Partners in the multi-million pound Bacton to Walcott Coastal Management (Sandscaping) Scheme gathered in Cromer yesterday, February 19th, for the signing of the construction contract.

The construction contractor for the project – Team Van Oord – was resolved at a Full Council meeting in December.

The significant project milestones include the decommissioning of existing outfalls and building of a new outfall during May and June; and the placing of approximately 1.8 million cubic metres of sand on the beach off Bacton Gas Terminal, Bacton village and Walcott village in July and August.

The Sandscaping scheme will see sand placed on beaches covering a 5.7km length starting north-west of Bacton Gas Terminal and ending to the south-eastern extent of Walcott. 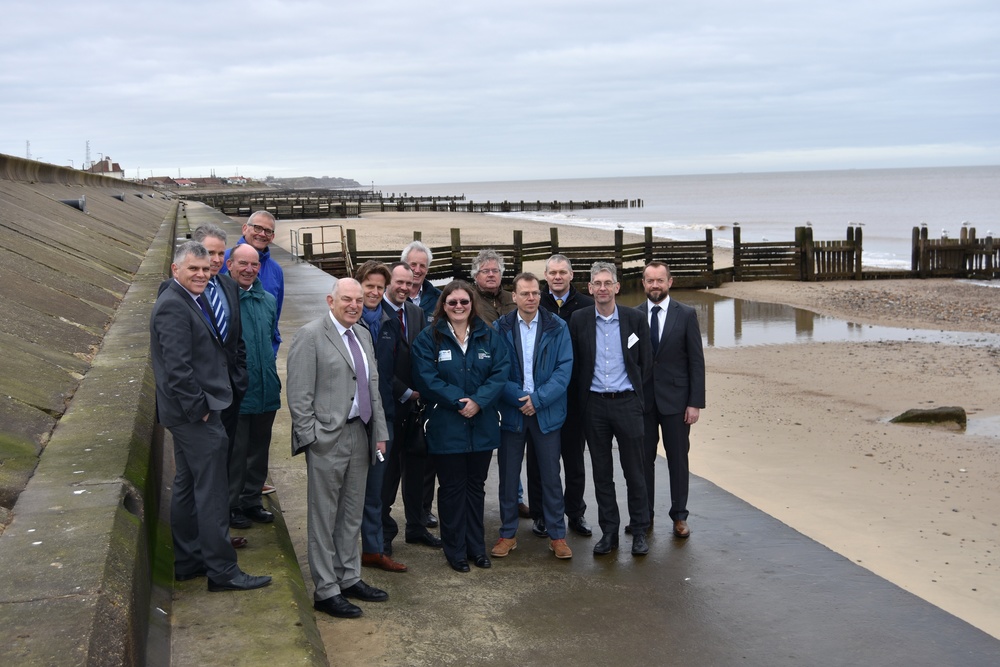 North Norfolk District Council is leading the Sandscaping scheme in collaboration with the Bacton Terminal Operators to protect nationally important infrastructure and benefit local communities. The scheme was designed by consultancy Royal Haskoning DHV, who will remain involved for design support and construction management.

The sand placement will be made up of:

Estimated scheme costs are between £18 million and £19 million.

The project will create significantly bigger beaches, improved beach access and better protection from the sea for the gas terminal and the villages of Bacton and Walcott. Over time there could be benefits to other villages along the coastline.

As part of the scheme Team Van Oord will be seeking to provide additional value to the villages through a number of initiatives, including provision of an additional £25,000 towards North Norfolk District Council’s Big Society Fund to support projects in the villages of Paston, Bacton and Walcott.

Cllr Sarah Bütikofer, Leader of North Norfolk District Council and Leader of the Liberal Democrat Group, said: “I am delighted we have got to this stage in this crucial project, which will help to provide additional protection to nationally important infrastructure and local villages, using the latest in modern technology and engineering.

“Team Van Oord have joined us today both to sign the contract and to give us a presentation including their impressive new highly fuel efficient dredger Vox Amalia, which will become a familiar sight off our coastline for a number of weeks during the summer.”

Cllr John Lee, Leader of the Conservative Group at North Norfolk District Council, said: “Having been involved in this project from the outset I’m delighted it’s coming to fruition.

“Not only will it provide additional protection to our coastline I’m sure it will become a huge tourist attraction while the works are carried out. I’d like to thank all the council officers who have worked tirelessly to make this happen.”

Jurjan Blokland, Chairman Team Van Oord: “Team Van Oord are excited to be chosen as contractor for this prestigious and innovative scheme.

“We look forward to working in collaboration with North Norfolk District Council, Shell and Perenco to deliver it successfully.”

Shell UK’s Bacton plant manager Belinda Ikazoboh, speaking on behalf of the Bacton Terminal operators, said: “We are delighted that this project contract is being signed.

“It is another significant milestone and we can now look forward to work getting underway on the UK’s first Sandscaping scheme this summer.

“This scheme to protect the gas terminals from coastal erosion as well as benefitting our neighbouring villages of Bacton and Walcott is very important to us.”