Ahead of Victory in Japan Day 2020, North Norfolk District Council held a small, distanced memorial to commemorate and pay respects to those who gave their lives in the Far East.

The ceremony, led by Cllr. John Toye, Chief Executive Steve Blatch and Leader of the Council Sarah Bütikofer, honoured the 152 men from North Norfolk who fought in the 5th Battalion Royal Norfolk Regiment.

Among those involved in the war in Asia were Sgt. Jack Farrow and Len Fiske, who left North Norfolk to serve in the Regiment and were sadly taken prisoner following the Fall of Singapore.

Sgt. Jack Farrow was represented at the memorial service, with three succeeding generations of the Farrow family, Francis, Cherry and Ed, with children Freddy and Phoebe. Len Fiske was represented by Stepson Bob Craske and his daughter. 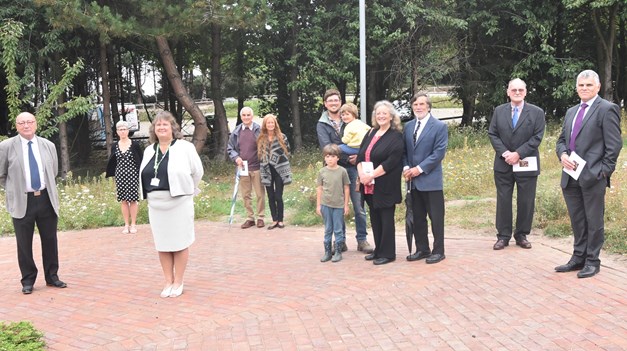 Cllr. John Toye, NNDC’s Armed Forces Champion and ex-serviceman led with a history of Norfolk’s contribution and involvement in conflicts in the Far East.

Cllr. Toye said: “It’s been an honour to mark this occasion with memories and families of people from our district. Remembering the hardship, they endured during the final stages of the Second World War to give us the freedoms we enjoy today. They were part of what is often known as the Forgotten Army. We will remember them.”

The service, which had to be limited due to COVID-19, was filmed and can be viewed below:

Saturday 15 August marks 75 years since Victory in Japan and the subsequent end to the fighting in the Second World War.

Remembering those who fell during the fight against Japan

Whilst VE Day marked the end of the war in Europe in May 1945, many thousands of Armed Forces personnel were still involved in bitter fighting in the Far East.

There were four battalions of the Royal Norfolk Regiment directly engaged in the fight against Japan. Three territorial battalions, the 4th, 5th, and 6th Royal Norfolk Regiment were part of the 18th East Anglian Division - which also included territorial battalions from Suffolk, Cambridgeshire and Essex. Having set out for Egypt in 1941, at South Africa they were reassigned to defend Singapore after the attack on Pearl Harbour and the Japanese entry into the War.

The 2nd Battalion Royal Norfolk Regiment, which was a regular battalion, was in the 4th Infantry Brigade of the 2nd Infantry Division - part of the 14th Army, often called the ‘Forgotten Army’, commanded by Field Marshall Slim. By early 1944 the Japanese had gained control of Burma and were preparing to advance into India. A Japanese expeditionary force crossed into India but found its advance halted at Kohima by the determined defence of the 2nd Infantry Division, of which the 2nd Battalion Royal Norfolk Regiment was a key part. If Kohima fell the road to India and its railway system lay open. Fierce fighting continued over three months until the Japanese were forced to retreat as far as Mandalay. Subsequently the Japanese withdrew to Rangoon, which they surrendered in May 1945

Whilst fighting at Kohima, one of the five Victoria Crosses awarded to men of the Royal Norfolk Regiment was won by Lt Knowland.

Sgt Jack Farrow of the 5th Battalion Royal Norfolk Regiment, was sadly taken prisoner at the Fall of Singapore and was in Changi POW camp for the remainder of the war. He was put in charge of the Cemetery and kept a secret diary which was turned into a book published in 2007 called 'Darkness Before Dawn" A Day of a Changi POW 1941-1945.

Len Fiske was called up almost two years after the outbreak of the war. Expecting to be posted to India, he was instead sent to Singapore. Just days after his arrival, Len and his fellow soldiers were ordered to surrender and found themselves forced to march 60 miles to work on the notorious Burma Railway. They were made to toil from 8am until 6pm, seven days a week, surviving on just two bowls of boiled rice a day.

After the completion of the railway in 1943, Len and his fellow 5th Battalion Royal Norfolk Regiment soldiers were transported to Japan, where they were imprisoned in the Omi POW camp and sent to work in a nearby factory. By the time Omi was liberated at the end of the war, Len had spent time in four POW camps.

Len was probably one of the oldest people to have served so long after their experiences in WW2 and sadly died in 2017 aged 102.

The 152 men from Norfolk listed in FEPOW came from the Towns and villages in North Norfolk.