North Norfolk District Council today launches an awareness campaign to help protect the thousands of seals who visit our shoreline every year.

‘Safer Seals’, supported by Friends of Horsey Seals, will highlight some of the things human visitors can do to help safeguard the popular animals, which can be found at points all along the North Norfolk coast.

British coastlines are host to two varieties of seal; the Grey Seal and the Common Seal who visit to   breed and to raise pups. The open, sandy beaches of Norfolk provide an excellent breeding ground for them to raise their young.

In the District, the Grey seals reside at Horsey Gap, arriving from November. The pups, which are fluffy at birth, grow at a significant rate during their nursing period of around 18-21 days, growing from 15kg to 45kg. In the weeks following their nursing, their coat moults, revealing their thick grey exterior, preparing them for their first steps into the sea to learn to feed for themselves independently.

During this period, seals are at their most vulnerable. Common risks to seals include human intervention, attacks from dogs and ‘flying rings’ (hollow-centred frisbees), with many injuries and incidents caused by these reported to the RSPCA and local animal welfare groups.

Friends of Horsey Seals formed 10 years ago, and have provided volunteer wardens for the seals at Horsey since. Their role at Horsey involves advising the general public of risks to the seals and to help any of the marine mammals in danger or distress, which can involve taking them to the East Winch RSPCA centre.

Flying rings pose a great risk to young seals as they progress through adolescence. Flying rings that are brought to the beaches can often get carried off into the waters and left behind in the sea or on the beach by visitors. Seals are naturally inquisitive creatures and these discarded rings can get stuck around their necks. Seals lack the ability to move their flippers forwards and are unable to remove them themselves.

As they grow, the rings can cut into their flesh, often causing horrific injuries and distress. 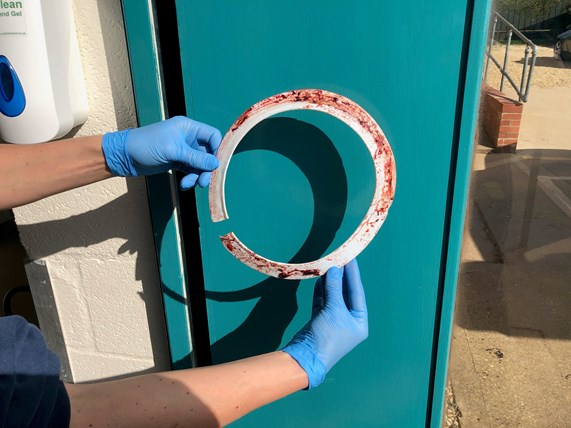 Chairman for Friends of Horsey Seals, Peter Ansell, recalls a seal dubbed ‘Mrs Vicar’ for the white flying ring trapped around her neck, that they had been trying to rescue for two and a half years.

Meanwhile, dog walkers are reminded to keep their dogs on leads and fully under control on any beach area that dog walking is permitted and seals may be present, as there have been reports of dog attacks on seals.

In general, human intervention causes the animals distress, particularly in times of the year when young pups are present. These wonderful animals should always be viewed respectfully and from a safe distance.

For the next four weeks, NNDC will continue to promote this campaign to raise awareness for the growing number of visitors returning to our area as COVID restrictions are relaxed nationally.

If you find a seal in distress and in need of emergency assistance you can contact any of the following agencies.