In recent years, flying rings have emerged as a popular alternative to Frisbees for their increased acceleration and have been sold in many shops up and down the coast.

Due to their lightweight nature and aerodynamic design, these flying rings are frequently lost in higher winds or if thrown with extra force. It is common at the coast for flying rings to be lost into the sea, where they float off or sink, if made from denser materials.

The materials they are made from do not break down or lose their structural integrity over time and in the water.

Seals are inquisitive by nature and will seek to investigate, or play with them as they find them in the sea. Many seals have been discovered by local animal groups (such as Friends of Horsey Seals, British Divers Marine Life Rescue and the RSPCA) with flying rings stuck around their necks.

Seals lack the ability to move their flippers forwards and have no way of removing these themselves. Pups grow at a significant rate, adding up to 30kg of mass in a matter of weeks; with such rapid growth, the seal pup can quickly outgrow the ring they are trapped in, leading to horrific injuries as it cuts into their neck.

A local example is a seal dubbed ‘Mrs Vicar’.

Mrs Vicar is an adult seal that the Friends of Horsey Seals had been trying to catch for two and a half years. She had a white flying ring trapped around her neck, mirroring the imagery of the clerical collars worn by vicars.

She was finally rescued by Friends of Horsey Seals during the Easter Weekend and promptly brought to the RSPCA East Winch Wildlife Centre, who have been tending to her wounds and rehabilitation.

The wounds she had suffered in those years had resulted in deep, bloody cuts and a raging infection which was potentially life threatening. 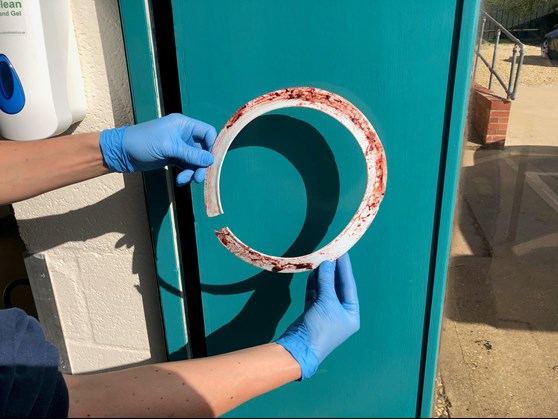 The flying ring removed from her neck. Photo: RSPCA

Manager Alison Charles, who has cared for Mrs Vicar, said:

“They bought her in, and we took her into isolation; the vet then removed what was around her neck, and ensuring [all remnants] were all out.

Her wounds were so infected, really deep where the plastic had cut into her neck. You could smell her as you walked into the isolation unit.”

She will remain at the wildlife centre in East Winch over the coming months while she fully rehabilitates.

Mrs Vicar is currently kept in an outside pool, where the salt water granulates and sooths the long term infection around her neck, much of which exacerbated by the scar tissue. She is well fed, and undergoing exercises which improve the mobility in her neck.

The work of the volunteers from Friends of Horsey Seals and the RSPCA has meant that Mrs Vicar, and seals like her, are spared the continued injury of their wounds or succumbing to the associated complications.

Flying rings are not the only risk to marine mammals or ocean wildlife. Netting, carrier bags (including ‘bags-for-life’) and fishing wire are also items that have to be removed from the necks of injured animals.

If you are heading to the coast, consider bringing alternate items to play with and remember to bring home or dispose of any rubbish as their discarded presence in the sea can cause unexpected and horrific accidental damage.

If you find a seal in distress and in need of emergency assistance you can contact any of the following agencies.