North Norfolk District Council members voted on seal safety and flying rings along the coast at a Full Council meeting.

A motion tabled by Cllr. Christopher Cushing sought to ban the use of flying rings and for the Council to repledge through the Safer Seals campaign its’ commitment to protecting seals along the North Norfolk coastline.

Cllr. Tim Adams, welcoming the motion, pointed out Councils do not have the powers to place an outright ban on flying rings, and the extent of Public Space Protection Orders did not cover marine life regarding flying rings.

An amendment was then agreed by Councillors, which sought to continue the Safer Seals campaign, with the Council’s Leisure team to work in conjunction with Friends of Horsey Seals and the RSPCA, and for the Council’s Foreshore Officers to engage with beach visitors, to educate them about the dangers.

Watch the discussion at Full Council

Flying rings lost in the sea pose a direct threat to seals, who can get them caught around their neck. With no ability to remove them, as they grow, the flying ring will constrict their neck and cut into them.

Mrs Vicar, a seal rescued by Friends of Horsey Seals, was a high-profile example of the damage that flying rings can do to marine life – the white centreless frisbee around her neck resembled a vicar’s dog collar and caused deep wounds which required months long rehabilitation in RSPCA East Winch Wildlife Centre.

In spring and summer 2021, as part of the Blue Flag Awards submission, the Council promoted seal safety and the vital work of agencies such as RSPCA, Friends of Horsey Seals and British Divers Marine Life Rescue with the Safer Seals campaign.

As part of the Safer Seals campaign, the Council’s Leisure team visited some of the Blue Flag beaches along the coastline to talk to beachgoers about the issues seals can face, how to visit beaches without disturbing any seals and what actions we can all take to reduce risk to them.

A flying ring amnesty was held on these days, where the public were welcome to take a bamboo ‘Safer Seals’ frisbee, which is degradable and presents no risk to marine life, and take home a fluffy seal pup toy.

Visitors could also donate to RSPCA East Winch Wildlife Centre, where injured seals along the coastline are taken, and £488.27 was raised for their incredible and selfless work.

Across beaches in the district, you can find posters which give guidance to beachgoers about how to act around seals, to protect them. It advises three behaviours – avoiding the use of flying rings, keeping dogs on leads, and avoiding getting too close to them.

Organisations and businesses are welcome to download the posters to display in their premises from the Council’s website. 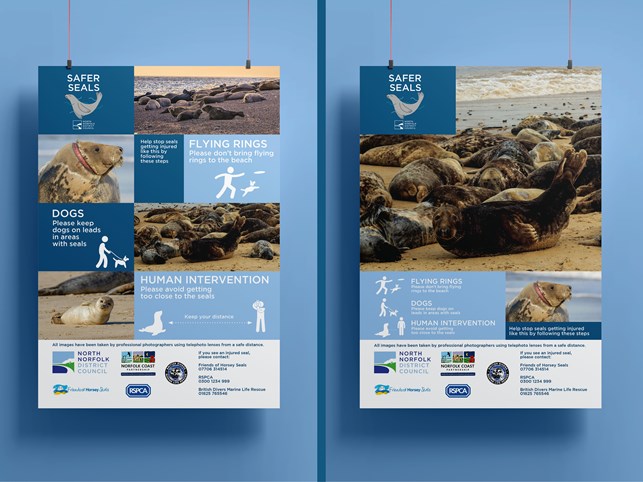 The Council will review existing signage along the coastline in the New Year.

Find out more about the Safer Seals campaign at www.north-norfolk.gov.uk/seals