Today marks the start of Break’s GoGoDiscover Trail, which returns with 79 individually designed sculptures, including 24 Steppe Mammoths and 55 T-Rex, all located around Norfolk.

Around North Norfolk there are eight Steppe Mammoths, one in each of the following locations:

The Council is a supporting partner for the countywide trail and has sponsored two Steppe Mammoths – Margaret’s Mammoth located in West Runton and Lumi located in Cart Gap.

Margaret’s Mammoth was created by Phil Daniels, who also created the Steppe Mammoth located in Pensthorpe Natural Park. This Mammoth was named after Margaret Hems, who discovered the first bone, of what would turn out to be the most complete Steppe Mammoth skeleton found in Britain, in West Runton in 1990. 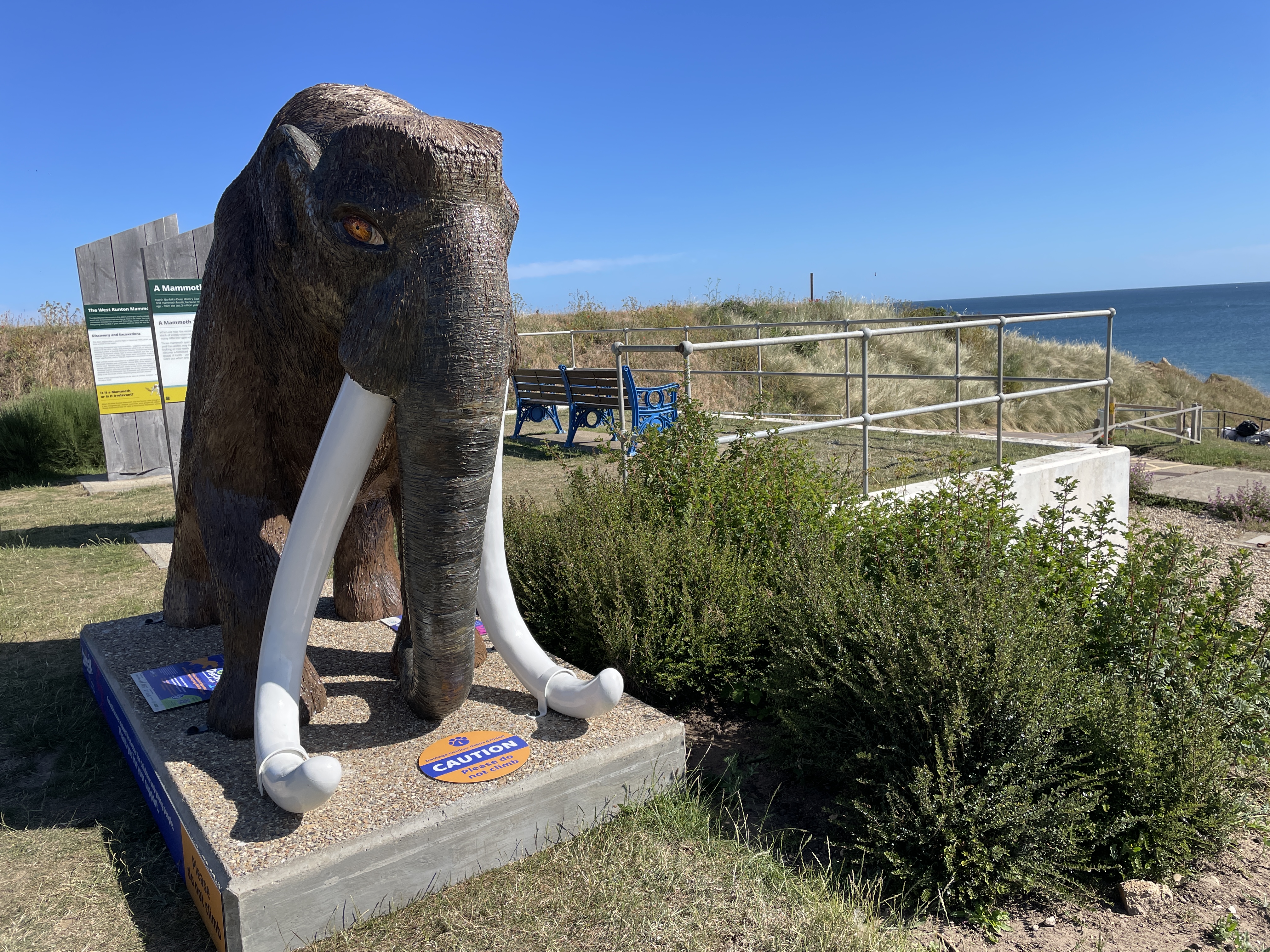 Lumi was created by wildlife artist and illustrator Jina Gelder, who tries to make people smile through her paintings and loves to capture personality in her work.

Lumi features an arctic seascape with mammoths to raise awareness of climate change and how rising temperatures are causing the ice caps to melt. Lumi also translates to snow in Finnish. 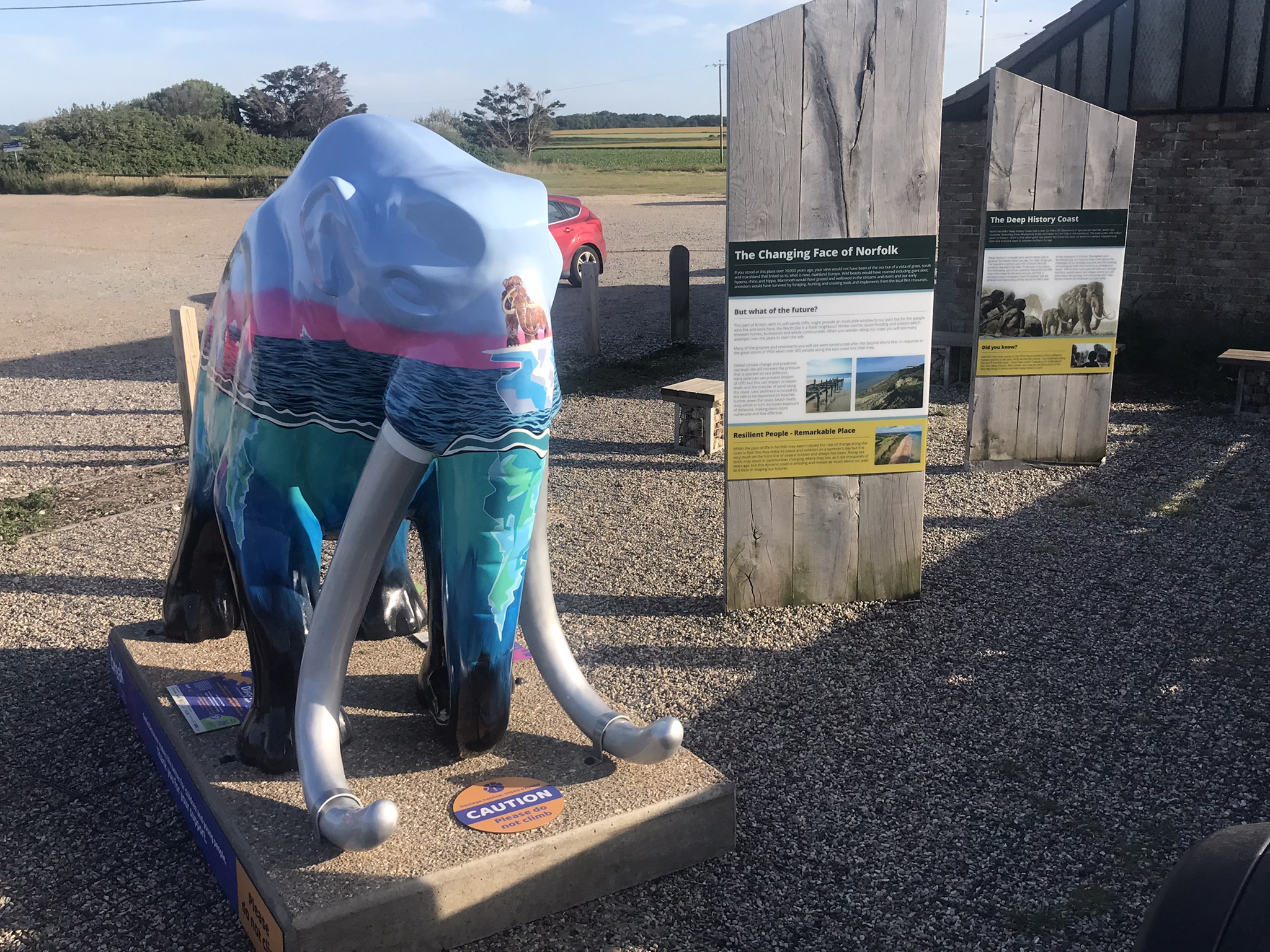 The GoGoDiscover Trail runs from today until Saturday, September 10 with T-Rex around Norwich, (including several designed by North Norfolk Schools and community groups) and Steppe Mammoths located around Norfolk.

The Trail is helping to raise funds for the charity through trail app downloads, trail maps, raffle tickets, merchandise and ultimately auctioning off the sculptures at the end of September.

Break is an East Anglian charity that works to better the lives of children and young people who are on the edge of care, in care and leaving care.

To take part in the GoGoDiscover Trail you can download the app onto your phone, pick up a trail map or download a trail map from Break’s website.

“It has been great working with the team at Break, first on the Mammoth Marathon and now brings Mammoths back to Norfolk and the Deep History Coast.

“We are so excited to have a countywide sculpture based on the West Runton Mammoth and Phil’s realistic design is a perfect fit for the discovery point.

“Climate change is also an important issue for the council and our communities so as soon as we saw Lumi’s with its beautiful design and powerful message, we knew it was a perfect choice.”

“The GoGo Discover Trail in north Norfolk is a wonderful way to celebrate the Deep History Coast and the unearthing of the largest and oldest nearly complete mammoth skeleton ever found in Britain.

“It’s an exciting way to find out more about this fascinating stretch of coastline as well as raise money for the charity Break”.

Deep History is a phrase increasingly used in place of the term ‘pre-history’ and has been coined to reflect the idea that in general the deeper you delve; the older things are!

NNDC’s sponsored GoGoDiscover mammoth sculptures are the newest edition to an exciting Discovery trail, with 11 interactive discovery points with more information about our incredible history and coast.