Find out about the new sandscaping solution

The beaches in front of Bacton Gas Terminal and the villages of Bacton and Walcott will be transformed during summer 2019 as a result of the Sandscaping scheme.

A UK-first multi-partner project, the scheme will see approximately 1.8 million cubic metres of sand placed and engineered on these beaches. The height and width of the beaches have be significantly increased and access to beaches improved.

The HAM318 is programmed to complete sand nourishment work by Monday 19 August.  Work will then commence completing the grading of the beach and demobilising. The closed sections of the beach are being reopened as quickly as possible. It is anticipated that the beach at Walcott Seafront will be opened by the 18 August.  The sand placement will be complete just to the south east of Ostend, Walcott.  The beach will then be re-opened from Ostend back towards Walcott seafront.  Team Van Oord will then complete any work necessary from the south east, heading north west clearing any remaining equipment and fully opening the beaches.

North Norfolk District Council is undertaking works to highlight the groynes at Walcott and Bacton which are not visible during high tide. In the short term signs and markers for these groynes will be placed on the beach. Longer term markers are being planned.

Beach closure information has been updated following an adjustment in working practices on the beach. This enables effective working of the team and prevents the need to ramp pedestrians over the nourishment pipe.

During the Sandscaping, the beach will be closed in sections of around 1000 m.

Each day the closed area is expected to move 250 m further along the coast to the southeast.

Consequently, each area will be closed for only a short period of time (just a few days) and there will be open beaches nearby.

Across the Bacton frontage, sand martin colonies are located in relatively discreet sets of burrows.  In the initial survey work, five colonies were identified in burrow sets: one near the access ramp to the south; two in the middle of the Bacton Gas Terminal frontage; and two located to the north (on the edge of the intended sand placement zone).  A new colony (with associated fresh burrows) has now been established adjacent to the colonies to the north of the site.  These six colonies have been surveyed weekly, based on a one hour watch per colony.  The tabulated figures are based on the number of active burrows (not birds) in that colony.  As we approach the middle of the survey period (which runs until completion of the sand placement), it should be noted that fluctuations in numbers (week on week) may be in response to the time of day for that particular burrow, weather conditions and also the stage in the breeding cycle.  Based on the breeding cycle. activity around burrows can increase/decrease in response to the status of eggs or young.  Overall, the trend across the frontage has been an increase in active burrows in existing colonies and the creation of new burrows (in both existing colonies and the “new” colony).

What progress has been made so far?

What will happen over the next few weeks during August?

The map below shows where we will be working and approximate dates. We expect all the sand to be placed on the beaches by the end of August. 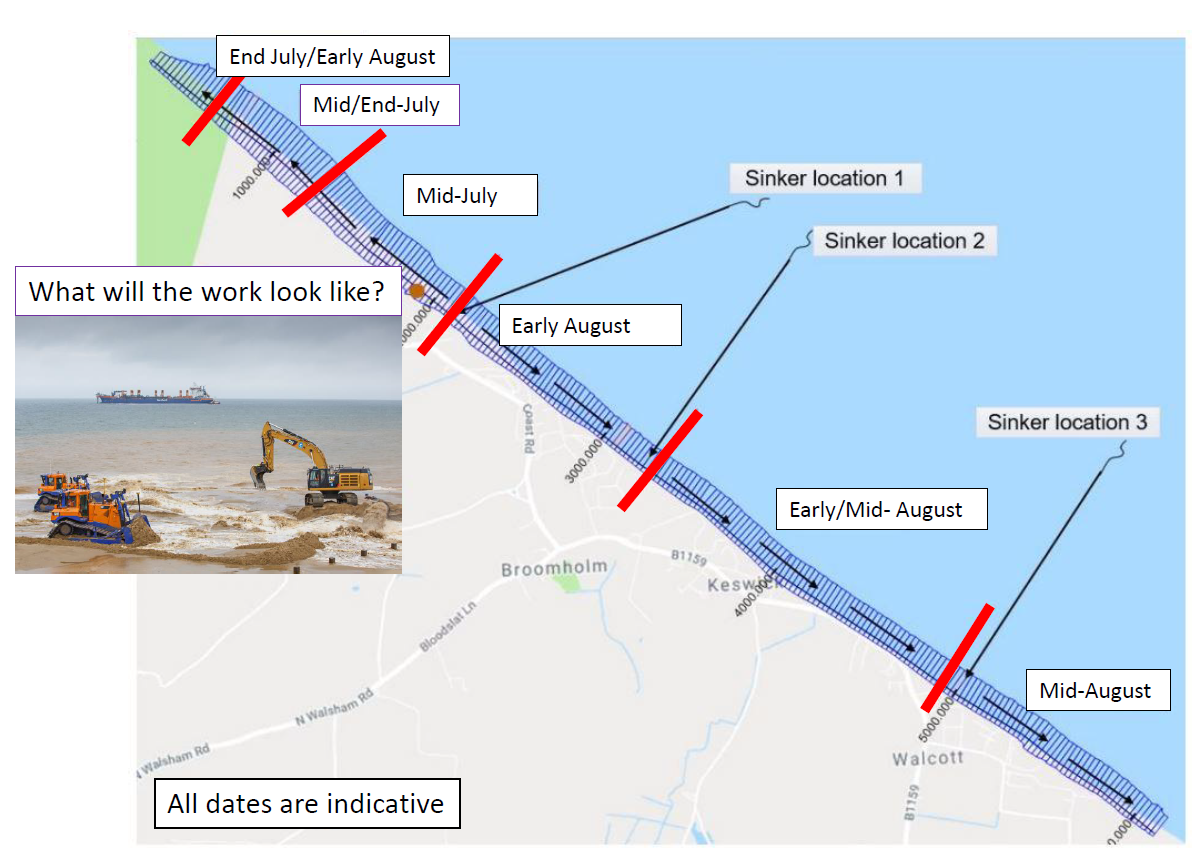 Sandscaping work. Sandscaping involves using a large production vessel (ship) to pump sand to the beach. The sand is then positioned using bulldozers with GPS. Whilst the contractor has made every effort to minimise and will be monitoring noise from plant working on the beach, you may notice some noise as this work continues around the clock.

Sandscaping work will progress quickly, starting at Bacton Gas Terminal and working towards Walcott. As the beaches towards Bacton village and Walcott are nourished, sections will be closed for public use and then reopened as soon as possible.

If you are in the area why not pop down to the Sandscaping visitor unit on Walcott seafront. The unit is open daily from noon to 5pm. 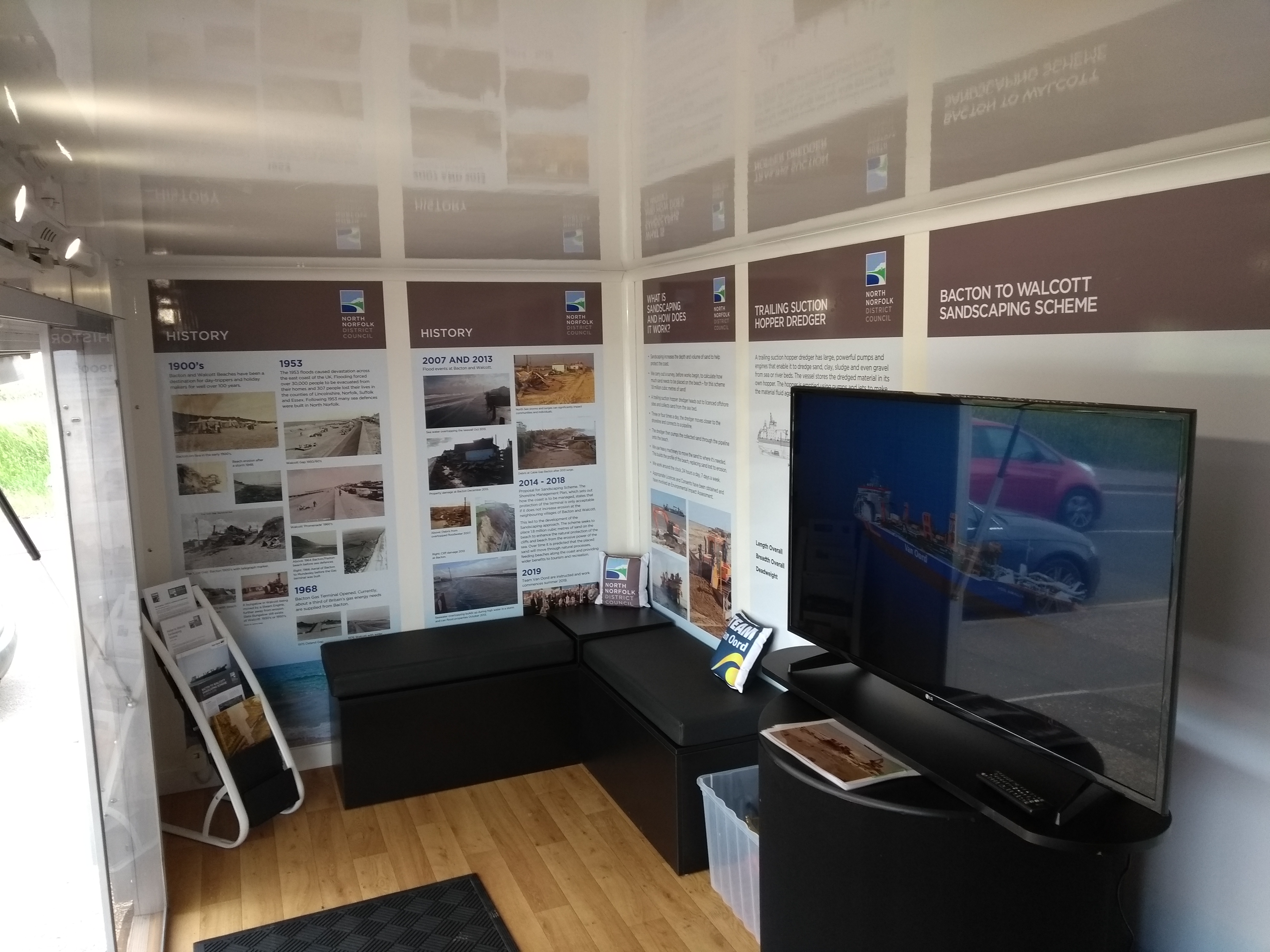 The below plan indicates approximate timings of sand nourishment along the frontage. Week 1 began on July 12.

The beach at the villages of Bacton and Walcott will be open as usual. While work is carried out at the Bacton Terminal constructing a new replacement outfall pipe the beach in front of the Terminal will have limited access. A pathway around the working area to provide a route to Mundesley, will be available whenever possible.

Find out more about the project below in the spring - summer 2019 update and visit our regularly updated Sandscaping FAQs page.

Also, the following video outlines the Bacton to Walcott Coastal Management Scheme which is designed to protect Bacton Gas Terminal and nearby villages of Bacton and Walcott by raising beach levels.

The following storymap gives more detail about the scheme. View in full screen.

The Bacton to Walcott planning application page contains information concerning the decision making process and those who were consulted during the planning stages of this project.