Vattenfall is proposing to build a 1.8 gigawatt offshore windfarm called Norfolk Vanguard, nearly 50km from Norfolk’s coast. You can find out more here about North Norfolk District Council’s involvement with the plan. 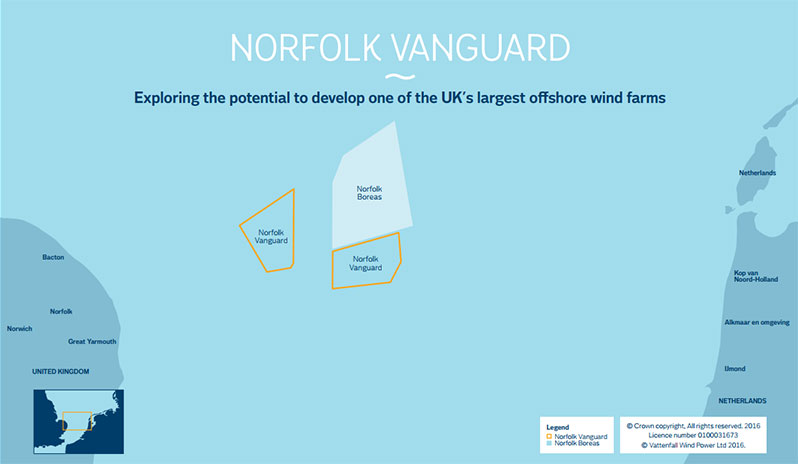 Norfolk Vanguard is a large scale offshore wind farm proposal and is defined under the Planning Act 2008 as a Nationally Significant Infrastructure Project (NSIP).

On this page you can find news updates published by North Norfolk District Council, links to relevant Cabinet meetings and other information including details of how you and your community can take an active part in the NSIP process.

As mentioned above, the Planning Inspectorate plays a key role in the process.

An overview and documents related to Norfolk Vanguard can be viewed on the Planning Inspectorate website.

View a breakdown of the six stage NSIP process and how to take part in it.

A range of issues around the Vattenfall project have been discussed at two recent Cabinet meetings.

On December 4, Cabinet discussed a report detailing the District Council’s proposed response to the Preliminary Environmental Information Report prepared by Vattenfall in support of its proposed Norfolk Vanguard offshore wind development. The Agenda and Decision List can be viewed on the Cabinet page dated 4 December 2017.

On February 5, Cabinet discussed forming a Sub-Committee tasked with ensuring that the very best possible outcome is achieved for the residents of North Norfolk through developing formal contact with Vattenfall. The Agenda and Decision List can be viewed on the Cabinet page dated 5 February 2018.

In December it was proposed that a Cabinet sub-committee be formed and this was formally agreed by Full Council in February. The purpose of this sub-committee is to allow a deeper understanding of the proposals for development.

You can view the terms of reference for the sub-committee, including its membership, objectives and frequency of meetings.

Meeting dates will be published here when they have been confirmed.

If you have a question you would like the sub-committee to ask Vattenfall, please email sandra.king@north-norfolk.gov.uk.

Visit the Vattenfall website for latest news and information about Norfolk Vanguard.

Do you have a question?

If you have a question you would like the Cabinet sub-committee to ask Vattenfall, please email sandra.king@north-norfolk.gov.uk

Latest news from the Cabinet sub-committee

A summary report from each sub-committee meeting will be added here shortly after the meeting has been held.